By the weekend before Annis’s birth, I was having pretty frequent practice contractions (Beatrix quote: “Mommy, how come you need to have practice contractions since you’ve already had so much babies?”).  I was fairly certain I would not be making it to my due date (For the record, she arrived 5 days early, right on schedule to follow the pattern set by our other three American-born girls: Bea was 2 days early, Junie, 3, and Coraline, 4.  I love stuff stuff like that.) 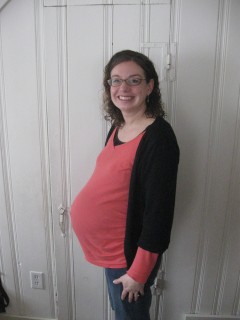 But with my blood count still too low for a homebirth as of my last appointment (10, at this point.  Higher than the 9.9 it was, but not the 10.6 it needed to be), the question of where we’d be having the baby became even more pressing than the when.  Resigned to the likelihood of having her in a far-away, unknown hospital, I decided to remedy at least the part of the situation I had some control over.  We scheduled a tour.

On Sunday, two days before I went into labor proper, we left all seven kids with my mom and trekked 45 minutes to a lovely new hospital to join a half a dozen sets of first time parents-to-be for a tour of a beautiful new maternity ward.  Trevor told me afterwards that he was watching my face during the tour and could tell that it wasn’t doing anything at all to alleviate my concerns about having our baby there.  Highlights of our nurse tour-guide’s commentary included: “About 90% of our moms choose to have an epidural, but no one would try to make you have one.  Unless, you know, you were really going crazy with the pain, ” and “We have our own O.R. right up here.  We do lots of c-sections.”  I bit my tongue and tried really hard not to ask where the bathtub was.  There clearly was none.  Despite having had my first three babies in hospitals with no ill-effects,  it seems I have become very spoiled now, and I just couldn’t imagine laboring in a place so very unlike my cozy little home.  Plus, forty-five minutes away!

I talked to my midwife the next day and expressed my concerns to her.  “It’s far,” I said.  “It is far,” she agreed.  I love her so much for what she said next. “I think I’d feel safer delivering you at the birth center than risking you giving birth at the side of the turnpike.”  Me, too!  She said she’d talk to Sarah, the other, newer midwife in the practice about it and see what she thought.

On Tuesday, when I went for my appointment, Sarah told me that she, too, would be willing to deliver me at the birth center, just 15 minutes from home and nearly as cozy.  I had to agree to an IV and an understanding that at any sign of bleeding, meds would be given.  Also, I promised not to bleed.  Deal.  I almost decided not to have her draw my blood again to check my hemoglobin.  It seemed a done deal that I’d be delivering at the birth center, so why bother?  But a few minutes after we left I had a change of heart and Trevor drove me back.  Just in case I didn’t give birth in the next couple days, and just in case my hemoglobin went up dramatically… well, just maybe a homebirth wasn’t completely out of the question yet. 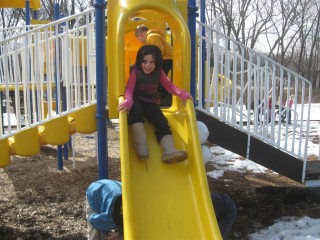 It was warm that day (note: it snowed again yesterday, and it is currently in the low 30’s.  Where are you, Spring?), and we all walked to a park about a mile and a half away after lunch.  This seemed to kick my niggly contractions into gear for a while.  We decided to skip small group, and by 8 PM, I was contracting every 7 minutes or so, and we called my mom and asked her to come spend the night.

Then at 10 o’clock I called her back and told her not to come.  My contractions had spaced back out to every 10 or 15 minutes, and I was sure I’d be able to sleep through them and start over again the next day.

Almost as soon as I called her off, they started coming every five minutes, and with some real conviction.  Reluctantly I called her back at 11.  She was still awake, and came right over.

I was just finishing my first of only two “labor baths” (I’m pretty sure three is usually the magic number, a statistic I perhaps should have paid more attention to) when she arrived.  We chatted for a while between contractions, and I took another bath at around 1 AM.

By 2:30, I was a pretty uncomfy little girl and my mom looked a little panicked that things might go quickly, so I woke Trevor up to consult.  He was thoroughly unconvinced that it was time to spring into action, but I persuaded him that with having to actually drive somewhere we needed to make the call earlier than usual.  “You didn’t say it,” he chided me. “Fine,” I said, rolling my eyes, “‘It’s time!’ Happy?”

I called Sarah, the midwife on call, who had just put the emergency on-call phone number into my new phone for me at my appointment 12 hours earlier.  “I trust your judgment,” she said.  And she was waiting for us at the birth center when we got there at about 3:30 AM.

One thought on “Annis’s Arrival: Part 1”